A Lesson in Resource Control 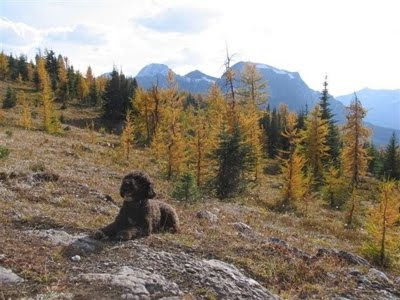 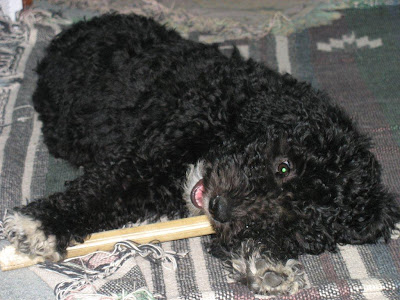 Will was born feral and raised by dogs, and as Turid Rugaas once said at a seminar: “If dogs raise dogs they get it right”. True enough, Will is very dog savvy, which isn't necessarily the same as dog friendly, but you can bet that her actions are always bang-on. Even so, in public places I don’t allow her to act on her own, because humans often misinterpret a dog who teaches another a valuable lesson with attacking, and good ownership is managing dog and environment in a way that keeps everyone happy.
A different situation in my own living room. I know that Will is accurate and never harms, so when she explains something to a dog, I watch, listen and learn.
The lesson in resource control took place in 2006. At the time Will was 5, and we fostered a 3-month-old Spanish water dog we named Reggae. If you google the breed profile you’ll find out that the SWD’s place of origin is Andalusia, a beautiful region in Southern Spain, where they are predominantly used as herding dogs for sheep, cattle, goats, pigs and even geese. Now, any medium size dog able to boss goats, pigs and geese around has to be tenacious, feisty, courageous and clever, and Reggae was all of that – and very cute. She was nearly the cutest pup, but also one of the most confident ones I ever met. Despite her tender age she seriously tested the boundaries with our seasoned residence dogs, Davie and Will. And it was Will who put, a least temporarily, a stop to it.
Will doesn’t like cow hoofs. In fact, she couldn’t care less about toys and chews other than her hard-rubber red ball that flies far and bounces high, real beef marrowbones, or a chicken-stuffed Kong. So the hoof in the middle of the living room meant nothing to her – but a whole lot to Reggae.
On that particular afternoon she, a busy and easily bored pup with nothing to do, eyeballed it, which did not escape Will’s awareness. Immediately Will got up and placed herself not between Reggae and hoof, but lay down on the opposite side. I guesstimate that each dog was about 3 feet in distance to the hoof. Whenever Reggae attempted to close in, prancing stiffly with a raised body and high tail, Will warned her with a low growl and hard stare not to, and Reggae backed away. That carried on for a little while, with Reggae persisting; first confidently, but eventually lowering her posturing and becoming more fluid, lips drawn a bit and play-bowing. It still didn’t impress Will much. Finally Reggae whined and whimpered, and obnoxiously rolled around in front of the hoof, pawing into Will’s direction with a stupid grin on her face, tongue hanging out. She tried every lowly and submissive puppy behavior she had up her sleeve; wooing Will sweetly in letting her have the prized, contested cow hoof.
That convinced Will that she made the point that who has seniority ought to be treated respectfully and walked away, not wasting another second on that hoof or Reggae. Once Will surrendered the loot to her, she left her in peace to enjoy it.
Smart and dog savvy Will, unlike some owners, acted like an authentic leader, instead of a bully. Bullies take things away forcefully; high status members control access to resources. Human, and canine social rules state that possession is 90% ownership. He who violates that is called a thief. Stealing from another person is against the law, and should be against the moral law regarding dogs. Typically, owners do not manage dog and resources very well, but, in the name of alpha-ism, take away something the pooch snatched, or even was given to a couple of minutes prior. That has profound consequences: it promotes suspicion, confusion and anxiety, and confident dogs are pushed into aggressive resource guarding.
Will’s access control behavior was very interesting to observe, but also surprised me. At the time I was under the impression that such dominance displays take place between two animals who want the same resource at the same time, with the same intensity. That was clearly not the case here. Will did not at all desire that hoof, but obviously recognized Reggae’s competitive and determined nature, and attempted to clarify who’s in charge when she had the chance; when Reggae was still young enough.
Both Will and Davie continued to help us with our beautiful Spaniard who we had for 7 more months. Will, in addition to teaching Reggae to say “pleeeeze”, also educated her in appropriate play behavior, while Davie showered her with attention, mothered and groomed her, and helped her through separation anxiety. Hubby Mike and I taught her the meaning of commands, self-restraint and attention – all alternatives to her aggressive displays. In the end, the cute, but problem-ridden pup became a loyal and beloved companion for a wonderful family, who continued to challenge her mind and body in a positive way.
Posted by silvia4dogs at 7:21 AM