The Top Dog is the Dog on Top – Of Furniture? 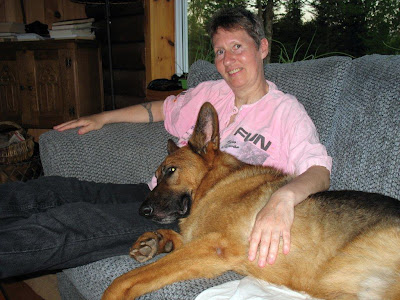 About ten years ago I attended an aggression seminar offered through Calgary’s continued education program. Our instructor was an ex-cop, and obedience trainer with a couple of decades experience. Not particularly harsh or unreasonable, he was traditional, Koehler-style, and like many others also accepted the dominance-hierarchy theory as truth. “The top dog is the dog on top”, he said and pointed out that height seeking - a dog who wants to be above or on the same level as his human, indicates dominance. Hence, he advised that ideally no dog should have bed and sofa access, and especially not the one who shows dominance in other ways, like being reactive or “generally disobedient”.
Not much has changed since. There are numerous articles and books, written by renowned dog experts and behaviorists, that explain why dominance is rarely the root of behavioral problems, but despite that many layowners and trainers still believe that a dog’s place is on the floor, spatially below the person. But here is the problem: in real life the mental “where the dog should be” often doesn’t transfer into according and consistently enforced rules, and that is because snuggling up with the beloved hairy sidekick is very pleasing for the human.
In the olden days, while the master found pleasure in the arms of his mistress, the dog kept the lady of the palace warm at night, and attracted her fleas and lice during the day. Not only was he tolerated on the lap and in bed, but wanted there. Nowadays, we can buy blankets to keep us warm, and most of us aren’t pest infested, and perhaps the whole flea and lice thingy is a myth anyway, but the fact is that people’s longing to cozy up with someone alive is innate. Today, our homes are warmer, but our society colder. The modern human lives in a fast-paced and anonymous world, but is still touchy-feely needy and seeks an outlet, and that’s where the dog comes in; he slipped into the role of preferred soul companion, confidant, lean-on, and receiver of all those velvety emotions. And because we have so many different breeds these days, not just the traditional lap toy poochini can be found sprawled on the sofa and hogging the pillow, but dogs of all sizes.
Concurrently, resurrected “discipline over affection” and “dogs are inherently status seeking” assertions are hard to miss, and that causes conflict in many owners. On one hand, they wanna cuddle; on the other, they worry that by doing so they’re bringing out the alpha wolf in the contemporary canine.
Indeed, that is the sentiment I often hear from my clients. When I ask during a consultation where the dog sleeps, intended to find out what degree of social inclusion he enjoys, I regularly get a sheepish, apologetic or defying confession that he’s on the bed. And equally regularly my clients are surprised and relieved when I tell them that it’s okay.
Yes, some dogs can be space possessive, but most want to be on furniture because it’s soft and comfy, and smells more than any other place like their beloved person, which offers security to an insecure dog, especially when he’s home alone. Truth is that most dogs aren’t dominating us, but are needy for our help and support, much like a human dependant.
Our Will sleeps beside me on her own bed at night, and chills out in different rooms throughout the house during the day, but when we visit friends, when she is away from the safety of her home, she glues herself next to me on the couch.
Neediness was also the motivation of our recent German shepherd house guest. Responsive and obedient on and off the leash, moving out of the way when asked, not confrontational over anything, sleeping on top of hubby Mike during a thunderstorm and hiding behind me when he heard rustling in the bushes and didn’t know what it was, he is a big baby, not a dominant alpha. We had him for about two weeks, and during the first there wasn’t a moment he was physically away from us. By week two, when he felt more confident with his new surroundings and routine, he often settled with Will in another room – and on the floor.
A dog on furniture is not a problem; one who guards and defends space, is.
If our 40-pound Aussie Davie, who had a personality that covered Mike’s mattress completely, would not have moved her toenail when he climbed into bed, but snarled at him instead, then we would have had a problem warranting action.
Prohibiting access is intuitive and what most trainers recommend with a space guarder, but it is a superficial solution and rarely successful, because it doesn’t take into account that a dog confident enough to contest one resource typically does so with anything that’s important to him: the yard, entrance to your home, where his food dish is, or the space around you or himself. The aggressive behaviors aren’t expressed on bed and sofa anymore only because the dog isn’t there, but continued in different contexts.
My way, counterintuitive but effective, is to provide social inclusion and resources freely, but to make them contingent on the dog’s relaxed, attentive and polite behavior. Resource control, not prohibition, changes a dog's attitude, even with the rare social ladder climber, and then you can snuggle all you want, like we do, and never have an alpha problem.
Posted by silvia4dogs at 5:17 AM