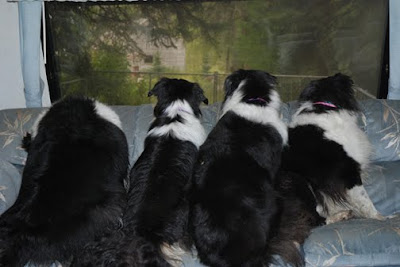 I read a lot. If you could peek into our home you’d see books everywhere, in every room of the house, including bathroom one, two and three. Plus I have a book in the car’s glove compartment just in case I arrive at my destination a few minutes early. If you’d call my behavior obsessive, you would be correct cause one identifying aspect of obsession is that the more you do it, the more you need to do it, and that certainly is true for me and reading.
Dogs can be obsessive too. A veterinarian friend and I discussed that once, and he said that dogs can’t be OCD, compulsive obsessive, because they miss the compulsive preoccupation of thinking impeding thoughts, but they can be obsessed with a certain action they repeat over and over again, to the point of exhaustion or self-mutilation.
Some dogs are neurotic because they have very poor welfare and endlessly spin, lick, or chew their own leg or tail. Humans drive dogs to insanity when they use them as breeding machines or completely neglect them, treat them erratically or cruelly punish.
Some dogs are wound up because they live with incompatible, albeit well-meaning people. They are task specialists with an intense drive to act on what they were selectively bred for. The Border collie comes to mind, who, in the wrong home and in lieu of sheep, fixates on a replacement activity, for example a ball, light flickers or shadows, and gets stuck in a behavior, like chasing or zoning in.
There is nothing wrong with a dog that’s super motivated, but the difference is that he is able to relax once his needs are fulfilled, compared to the obsessed one who remains zoned in, strung out and is chronically overwrought and antsy.
Dogs that are out-of-control wingy are a reality in my world. Not in my home thankfully, but many of my clients’ dogs are wound tight and spring loaded, and typically because they are anxious, overly stimulated, or not at all. The expressions are many: incessant barking, whining, destructiveness, excessive water consumption, restless pacing and panting, and pushy attention seeking. Another sign that a dog is too pumped is a hard mouth. With increased arousal level, the inhibition decreases, including bite inhibition.
Such a dog can be very taxing on people’s nerves - and irritating for other dogs as well, who either become anxious themselves, or attempt to control and correct the “crazy” one to change the situation.

Thanks to a popular TV show, under-stimulation is often blamed as the reason for unruliness, and thus many a frustrated owner cranks the physical exercise regime up in hopes it tuckers the pooch out. It’s true that if no purposeful activity is provided; if the working dog isn’t given a job, he is forever bored and stimulation seeking - and a nuisance, but just as frequently, in fact more often, the opposite is the root for obnoxious behaviors, including the inappropriate use of mouth and teeth.
Both “Stress in Dogs” by Martina Scholz and Clarissa von Reinhardt, and “Control Unleashed” by Leslie McDevitt, state that overly stimulated dogs are more reactive than under-stimulated ones, and based on my own experiences, I concur.
Unceasing exposure to sounds, sights or smells, always being patted, hugged or stroked, or constantly doing something, including fun stuff, is not natural. In “Shadow Syndromes”, John J. Ratey, M.D., explains that almost any excess – physical, mental or social, can overwhelm the cerebral cortex and drive an animal into the limbic, the emotional and reactive realm. And a survey conducted in Germany found that the less a dog rests, the lower his stress threshold. In other words, the more active, the more trigger reactive.
Over-stimulation often happens in a shelter environment, but also in the dog’s home or daycare, the off-leash park or training facility. The contemporary canine reflects our society in many ways, including that like us some rarely have a moment of silence, and that creates trouble especially with the ones that are by nature sensory sensitive to sound, motion and touch. Many dogs belonging to the herding group fall into that category, but also ones that arouse with hands-on-body, often young Labradors and boxers. They can wind up real fast, and if stimulation is perpetual never completely relax, startle easily and overreact with barking, charging and nipping to any unexpected trigger - even just a plastic bag dancing in the wind. For some dogs, life in an urban or suburban setting in itself can be too overwhelming.
Exercising an already overly stimulated dog more is circling the toilet bowl. Chances are that restlessness worsens, and on top, like with a human athlete, the dog builds more physical stamina. That means that unless he is pushed to exhaustion, every day, which can require a considerable amount of time and effort for some dogs and is therefore unrealistic for many owners, he will become physically more capable, not more tired.
If your dog only behaves cause he’s exhausted, his manners won’t last long and vanish altogether if time constraints or physical limitations prevent you from running him till his tongue hangs to the ground. Your well-intended efforts might backfire and the pooch will endlessly demand more of the same, and if he gets it, become more addicted and more demanding. Plus, there is a risk that he develops a chronically heightened state of sensory awareness and reactivity to environmental stimuli.
The Catch 22 is that if you’d eliminate the activity your dog is obsessed with cold turkey, without replacing it with something else, he’ll go bonkers, and likely you with him.
So what is the solution? Incrementally swapping mindless exercise with mental stimulation is one. Fun and positive obedience training - and I emphasize force-free cause pressure drives frustration and that's counterproductive to relaxation - learning tricks, interactive toys that compels the pooch to use his noggin to get his food, and yes, prolonged walks interspersed with calming nose games, obedience and, like walks with a friend, quiet time to commute with nature and enjoy each others company in stillness.

Annoying behaviors aren’t always obsessions, and not all obsessions are bad. My reading one enhances my life. It’s an asset because I learn a lot and don’t drive anybody batty. A dog’s can be an asset too, like a Border collie’s herding addiction that helps the human shepherd. But in an average pet home high drive and sensory sensitivity can be problematic. It has nothing to do with a dog being bad or dominant, but causes owners to lose their cool nevertheless. And a very driven dog’s needs are typically not solved with a meaningful walk, tricks or a few obedience commands alone. Dog sports, like Disc, Agility, Freestyle Dance, or the new sport from Germany called Treibball (here's a link for a great youtube clip http://youtu.be/qFpH_WLC4qs + you can google Treibball to find more) can be very satisfying, structured activities. Structure is crucial, because not only will your dog have a sense that he is working, but he also knows that he is working for you, that you control the drive. For example: throw a ball or Frisbee, but not a stick, because sticks can be found everywhere and allow nonstop pestering by pushing it against a person’s leg.
Provide a variety of activities so that the pooch isn’t fixated on just one and, also crucial, teach an off-switch command that conveys that the interaction is over for now.

Unfortunately there isn’t a one-fits-all guideline, and finding the golden balance between mental and physical stimulation, orchestrated tasks and opportunities to rest, can take some dabbling. But it is worth it, cause in the end you can have a dog who is busy but still focused and centered, and best of all, able to chill out – alone and with you.