No, I am not talking about people who can never accumulate enough stuff, and never throw anything away, and eventually drown in junk and filth. The ones you see on reality TV; Hoarders TV exposes for ratings.
In reality, I don’t watch much reality TV: No Dog Whisperer, no “dumb-and-proud-of-it” hick show, and no crazy junk and animal hoarders in my living room - unless I need a reality check when I obsess over my home being a tad too messy. One episode convinces me that I don’t have to feel guilty about spending the afternoon in the sun joined by a glass of wine and a book when I ought to tidy up.
I am talking about canine hoarders; dogs that collect every scattered toy and whatever else they find on the ground and deem valuable, put it on their bed or in their crate, and often guard the accumulated booty against cohabitating fur animals, and sometimes also against the hairless kind.

The root of resource hoarding and guarding is resource insecurity. Always. And almost always humans are to blame: owners and breeders who either stole the dog's possession in the name of misunderstood dominance, or raised him in resource deprivation - didn’t provide what the pooch needed and thereby forced him to compete for the little that was available. In the latter case, both the dog who regularly lost out but also the one who was successful in defending his possessions can become a hoarder and aggressive guarder in the next home.

My friend Ann’s new Border collie pup Lauchie reminded me recently that even pups from a really good breeder can have quirks. Here he is. 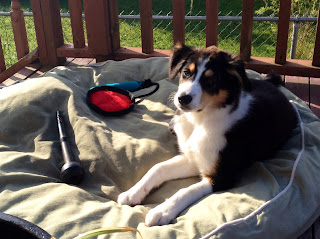 And this is our last foster dog Reggae, also conscientiously bred, also a hoarder at a very young age. 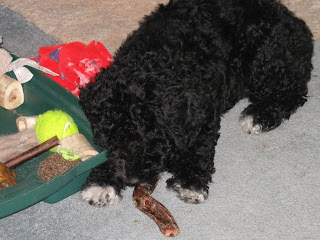 But let’s talk about the collie – it is fresh in my mind.
Little Lauchie is from England. His first eight weeks of life were how it should be for every puppy born, and there was no reasonable expectation that he'd be unsure about anything, including resources. And yet he seems to be and collects, as Ann likes to name the behavior because it sounds a lot nicer than hoarding.
Although Lauchie isn’t aggressively guarding his stash, it is still an issue his momma wants to address. For starters, he is still just a baby and things could change as he matures, but also because he evades coming when called when he is in possession of a toy.  Or when he returns, he does so without it.
Running away with a treasure between the teeth can be a puppy thing, but Ann felt that it wasn't the fun factor of playing catch-me-if-you-can that drove the behavior, but the worry that he’d lose his bounty.
Lauchie is smart and sweet and social and shows all the behaviors of a carefully bred and raised pup. He is attentive and keen to be with his person, at the breeder the litter had everything they needed, and he has now always accessible toys aplenty. He gets to play many games, and comes just fine when he doesn’t carry something. So, why the out-of-character behavior when it comes to toys? It initially had us stumped. Funny, Ann’s dogs have a habit of making my brain hurt – and I mean that in a most affectionate way.

The best explanation we could come up with is has to do with Lauchie’s thoughtfulness. Yes, you read that right and yes I am anthropomorphizing but I don’t care. Besides, it is the best word to describe his personality that, by the way, consistently presented itself very early on. Lauchie is not slow-witted or fearful, but watches, and processes, and then acts. He has natural impulse control, and with so many dogs getting into trouble because they lack it, I wouldn’t exactly say that that is a problem, but it might mean that he lost out against his siblings who all were quicker on the draw. I think we are on to something because Lauchie is also very food driven, which corroborates that his littermates might have gotten more than their fair share in that aspect as well.

There are two ways to address hoarding: either one needs to convince the dog that resources never run out, and that it's more fun to bring toys than hoard them, or one must eliminate free access to toys completely and also control what else happens to lie around within the dog’s reach. I like the former better for following reasons: Free access to a toy box alleviates anxiety and boredom, micromanaging the dog and resources for a lifetime is a cumbersome thing to do, and common sense dictates that resource overflow is the fasted way to instill resource security.
That said, with some hoarders free resource access can make things worse, as was the case with another friend’s rescue German shepherd. She had a number of anxieties, and was overwhelmed with too many toys and bones and the task to collect all of it, was constantly searching and pacing, and permanently tense trying to guard the treasures on her bed against the other dog. Life in paradise initially made her more anxious, and taking a more structured approach to resources was necessary. She is fine now, by the way, thanks to patience and the unfailing provision of everything she needed and wanted.

Since little Lauchie is neither anxiously pacing nor aggressively defending his collections, there is no pressing need to withhold free access. Instead, Ann exploits Lauchie’s brain and love to learn and interact – traits found in many dogs not just Border collies – and teaches him to identify individual toys by name, and then bring the one she asks for in exchange for a play session. It is a game that stimulates any pooch’s mind and body, but with a hoarder the added benefit is that toys are going to be perceived in a different way: Because it directly involves the human, it puts value on the person and not just the toy. Eventually, the dog will bring specific objects to solicit interaction with his person, which will become more rewarding than playing keep-away alone.
In addition, it creates a hierarchy of toys and games, meaning that the dog will have a preference he didn’t have before. When some object are of high value, naturally all others are meh and hopefully not worthy of hoarding any longer.
Like with any behavior we want changed, new habits can take time, and until then it is important that the undesired old ones aren't rehearsed. To prevent Lauchie from running away with a toy, Ann taught him “retrieve the named toy” in the bathroom first, a very small space that didn’t give the pup any option other than to share his toy with his momma. The idea is to orchestrate rewarding experiences, and then gradually expand outward to bigger spaces.
I have no doubt that it'll do.