Santi Paws is Coming to Town 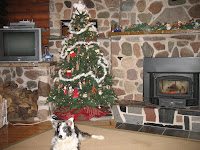 We wish you a Merry Christmas, or a Merry whatever you are celebrating this time of year.
For 2010 we wish you and yours Peace, Health and Prosperity.
There is snow on the ground where I live. The winter wonderland look was the last thing that needed to happen before Christmas; the cookies are in the house, tree all up and decorated, and the dogs’ wish list to Santi Paws went out weeks ago. I think I mentioned before that Davie and Will are brilliant, the little darlings, but they aren’t able to scribble on paper what they’d like to find in their stocking, hung with care, so I did it for them.
According to a survey conducted by Petfinder, 63 percent of dog owners give Christmas presents to their pets. We belong to the majority. Including the canine family members into the festivities feels good all around; for humans because giving is better than receiving, for dogs because they love to get stuff. Period.
Gift giving is only one aspect of the Holiday Season. There is last minute shopping and cleaning, big meals to prepare, functions to go to and company that’s coming; family gatherings sometimes with people one doesn’t really want to gather with.
All that can be exciting, but also very stressful for people – and dogs. By now, most everyone knows to safeguard the box of chocolates from the dog, and to refrain from noshing him fatty food scraps.
Helping him deal with Holiday stressors is just as important. The young, inexperienced or timid pooch could spook when a big, red Santa inflates in front of the house, or when there is a snowman with a black hat and broom in a yard where there was none before. Suddenly, his familiar turf that always looked the same, changed - and that is scary, and his natural response is to bark, lunge or bolt. The smart owner calmly increases the distance until the pooch relaxes, and then lets him observe the new things so it can be checked off as non-threatening. Offering a piece of his favorite loot, or engaging him into a familiar and fun game, further contributes to the cagey canine feeling cool again in his ‘hood, despite all the changes.
Every dog, even the friendliest people lover, can be overwhelmed when too many hands are patting, especially children’s. And because he can’t pour himself another glass of wine to calm the nerves, he might growl – or shy away, bark, chase, pant or pace.
Apropos wine, even you being a little looped with too much cheer can weird a sensitive dog out, and if you call him to come, he might not obey.
A dog often doesn’t have the option to avoid or escape, physically or mentally, all that commotion. The onus is on the owner to recognize when the pooch has had enough partying, and to provide a safe, quiet place where he can chill undisturbed.
That, and keeping the dog’s routine as much as possible, for example feeding the same food at the same time, and going for walks at the usual time, further ensures that giving presents on Christmas Morn’ isn’t the only happy event during the festive season.
I wonder what the girls gonna find under the tree this year? A Nina Ottosson interactive toy they can both play with? A ball for Davie to add to the dozen she already has? A couple of brownies from the Three Dog Bakery for Will? Extra meaty marrow bones and “accidentally” dropped pieces of low-fat roasted turkey breast, or that jazzy white collar with black sheep prints for Davie – wait, that would be a present more for me; but an extra long walk where there are a few slow squirrels, or maybe a….
Posted by silvia4dogs at 6:15 AM